The Blockbuster firm is a leading provider of rental movie and game entertainment with approximately 8,000 stores.

The company operates in the US, Europe, Latin America, Australia, Canada, Mexico and Asia. Blockbuster is headquartered in Dallas, Texas and employs 58,561 people; this figure includes full-time, part-time and seasonal employees. The company recorded revenues of $5,287.9 million during the financial year ended January 2009, a decrease of 4.6% over 2008.

The operating loss of the company was $293.

Blockbuster attributes the decline in profits largely to non-cash impairment charges to its goodwill and other long-lived assets. By offering both DVD by mail and downloadable, or streaming, rentals. Blockbuster is also currently undergoing an organization-wide overhaul and divesting from foreign interest and refocusing on their core businesses in the United States.

To increase its business, Blockbuster launched advertising campaigns and also undertook joint promotions with fast food outlets such as Dominoes Pizza and McDonald’s.

Initially Blockbuster business revenues consisted on movie rentals from stores and late fees charged for rentals. In August 2004, Blockbuster introduced an online DVD rental service to compete with the established market leader, Netflix, and to be able to keep up with the current trends and technology.

Despite the emergence of new technologies such as movie downloads and online movie purchases, the online rental business remains popular. Against other competitors, being the only company that can truly compete with Netflix is a sustainable competitive advantage in the online renter market. Currently, Netflix and Blockbuster are the only two companies genuinely competing for online customers. In-home viewing technology improves and has become cheaper to download movies over the Internet. In-home entertainment is offered through various distribution channels. 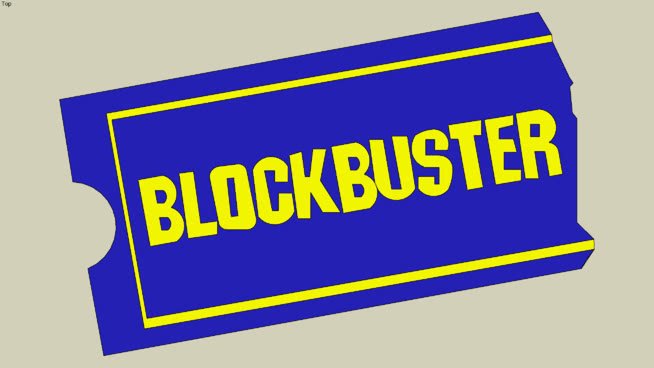 Blockbuster has taken advantage of this change in the industry by providing Blockbuster Total Access Premium and Blockbuster Total Access Mail; these plans are available to all current and new subscribers to Blockbuster online. Finally, the elimination of late-fees, they have successfully warded off competition from significant competitors, excluding Netflix. C. Competitor Analysis: The chief competitor to Blockbuster is Netflix, an online movie rental subscription service providing services to nearly 8 million subscribers with more than 100,000 DVD titles.

The company operates in the US. The company is headquartered in Los Gatos, California and employs about 2,670 people. The company recorded revenues of $1,205.3 million in the financial year ended December 2007, an increase of 20.9% over 2006.

III. Identification of Environmental Opportunities and Threats and Firm strengths and Weaknesses

As a strength Blockbuster kept up with the trends changes and rise in technology in order to compete with its rivals, this was demonstrated when the firm invested significantly in their online subscription service in 2006, including the launch of their Total Access plan in November. This plan grants customers the option to exchange their DVDs through mail or returning them to a local Blockbuster store in exchange for free in-store movie rentals. One of the firm’s weakness, is due to Blockbuster’s high amount of debt, their borrowing capacity is severely limited. Currently they utilize variable rate loans, and likely they will continue to do so, thereby increasing the amount of interest payments.

As Blockbuster finds its firm being attacked by competitor like Netflix who through its First-mover incentives has managed to leave Blockbuster behind. As an alternative Blockbuster could merge with Netflix in order to possibly survive

Blockbuster revenues are derived from the movie and entertainment market.

The firm’s dependence on this market has been in part a reason the firm is having difficulty competing against its chief rival, which in view of the changes in the market decided to move and provide a new and differentiated service.

Using the Strategic action as a response, as mentioned above, Blockbuster should re-invent ways to compete with its rival or merge. Another good suggestion is to provide services by vending machines at a lower cost than that of the competition.

Blockbuster chief rival, Netflix has another advantage on cost in that it need not to worry about buildings, associates, building maintenance, and other items that incur more cost. Also a good strategy is offering movies preloaded on flash drives for convenient viewing on PCs or laptops on a jetliner; kiosks in stores that burn DVDs and download movies onto flash drives while you wait. Although it may be necessary to maintain a few buildings, these should be kept to a minimum and only after making a geographical assessment of were these buildings will be needed. For instance only having buildings in communities were older costumers who prefer having a face to face movie rental. The other method should be to copy a system similar to Wal-Marts Redbox vending machine.

After developing the vending machines and kiosks, instead of having large buildings a suggestion is to make contracts with Malls and other department stores and even restaurants to carry these vending machines and kiosks were customers while doing other shopping activities could browse for movies they may want to view later, rent a movie, download onto their flash drives to view on their laptops as well.