The final two stages listed occur in the mitochondria.

2. What are the consequences of a proton gradient and how could a gradient be used in the mitochondria? List all the possibilities that come to mind.

Protons have a strong positive charge. The electron transport chain that is part of the process of cellular respiration powers carrier protein “pumps” which actively transport H+ ions Single protons) from the mitochondrial matrix across the inner membrane to the intermediate space.

This voltage draws the protons existing in the intermediate space towards the mitochondrial matrix on the other side of the inner membrane. However, the membrane is impermeable to the protons, and therefore they must travel through a special protein called the ATOP syntheses. As the protons pass through the syntheses towards the relatively negative mitochondrial matrix, they spin a special part of the protein which acts like a turbine, and in doing so they give up some energy to the ATOP syntheses. This energy is used by the syntheses to produce ATOP. The extra energy allows ADAPT and Pi to bond, forming ATOP: the main function of the entire process.

3. What must be an important characteristic of the inner membrane in order for this gradient to be established and maintained? The inner membrane must maintain a greater concentration of protons in the intermediate space than in the mitochondrial matrix in order to maintain the proton gradient. To accomplish this task, the membrane must be able to limit and control the flow of protons traveling through it. The membrane itself is impermeable to protons, which will render any proton gradient unusable.

To get around this, the membrane must contain embedded carrier proteins through which the protons can travel. These protein must move protons out of the mitochondrial matrix back at a rate equal or greater to that t which they are entering it from the intermediate space.

In this way, the proteins control the flow of protons in such a manner that there will always be a much greater number in the intermediate space than in the mitochondrial matrix.

B. To the amount of ATOP produced by the mitochondria? Rhea lack of a proton gradient would mean that protons would no longer diffuse through the ATOP syntheses, as there is no difference in charge or concentration which Mould cause them to do so.

When working normally, as protons pass through the syntheses, they lose some energy, which is then used to bond ADAPT with Pi and form ATOP. No proton gradient would mean no movement of protons through the syntheses, and therefore ADAPT would not get the energy it requires to form ATOP. Production of ATOP in the mitochondria would greatly decrease, as this process is responsible for 90% of ATOP production. Substrate-level phosphorescently in the citric acid cycle would continue to produce ATOP, but the overall production by the mitochondria would be only 10% of normal as oxidative phosphorescently stops.

To the energy released in the movement of the protons? Rhea movement of protons would no longer be controlled by the carrier protein embedded within the inner membrane of the mitochondria. Normally, the ATOP syntheses is able to use the potential energy contained in the protons passing through it to produce ATOP, but as was explained in the previous question, protons Mould no longer be passing through the syntheses. Uncontrolled movement of this kind would mean any energy release would be uncontrolled as well, and therefore it Mould be released as waste energy, most likely as heat. It would not be used in a way useful to the cell; namely in the production of ATOP.

5. Most ATOP is consumed soon after its production.

The cell has ways of detecting how much ATOP is produced and needs to keep its supply constant. If you poke a hole through the inner membrane, “hat might the cell do to try and adapt to the change and reestablish previous levels of ATOP? List all the possibilities. The membranes in a mitochondria are made up of a phosphoric belayed. Each phosphoric floats freely within its layer, keeping together due to the hydrophobic and -Philip ends of each lipid holding it in a fixed orientation.

Were a hole to be made in the belayed, the other lipids would likely flow Into the gap to fill the gap.

It can be compared to trying to make a hole in a ball pit; balls will roll back to replace the ones you Just removed. Although the membrane will be temporarily disrupted and the proton gradient Nil be affected, this would only be temporary, as the electron transport chain and carrier proteins would re-establish the gradient and ATOP production would resume.

Assuming that a hole in the inner mitochondrial membrane could be created and maintained, oxidative phosphorescently would cease, and therefore ATOP production Mould decrease by about 90%. The cell would still be able to produce ATOP through substrate-level phosphorescently, which under normal conditions accounts for 10% of ATOP production. This process is part of Glycoside, which does not occur within the dictionary, and therefore would not be affected by the membrane rupture.

In order to attempt to reestablish previous levels of ATOP, the cell could attempt to speed up the rate at which it consumes glucose and performs glycoside.

If glucose was not available, the cell may begin to consume other food sources, such as fat stored in the body. In this way, ATOP would be produced at normal levels, however much more inefficiently. The grooming phase would also be unaffected, however the next step, the citric acid cycle, would stop functioning. Therefore, acetylene-Coca would remain unused, and would need to be excreted by the cell as waste. 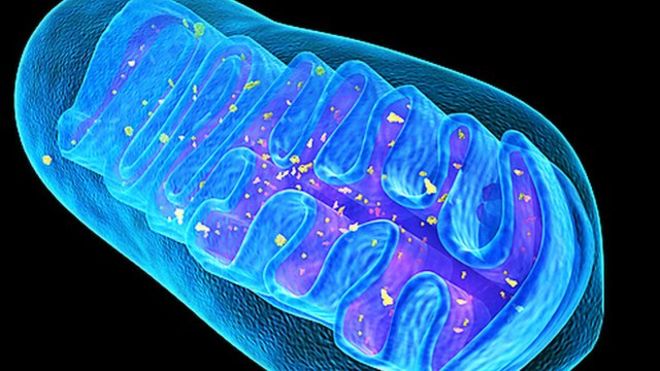 5. Summarize what happens to ATOP and glucose oxidation levels in response to treatment with DIN. Based on the given information, it appears that the effects of DIN are to slightly decrease the production of ATOP while substantially increasing the level at which glycoside occurs. This suggests that DIN causes glycoside to occur at a greater rate while reducing the efficiency of oxidative phosphorescently. What could cause the effects shown in the graph? Propose as many mechanisms as possible.

In order to cause the effects shown in the graph, DIN must reduce the efficiency of the conversion of glucose into ATOP. This would mean more glucose would be consumed but less ATOP would be produced, which is what the graph shows. DIN is a proton oenophile, meaning it acts as a proton transporter, carrying protons over biological membranes. When introduced to a cell, one of the areas if affects is the inner mitochondrial membrane.

DIN allows protons to move from the intermediate space to the mitochondrial matrix. Depending on the dose of DIN, it will allow protons to pass through at a certain rate, partially nullifying the proton gradient existing across the membrane.

As explained earlier, the lack of a proton gradient stops protons from traveling through the ATOP syntheses and producing ATOP. Although DIN does not totally eliminate the gradient, which would likely result in the death of the cell, it does reduce its effectiveness, and therefore the efficiency with which ATOP can be produced. This explains the results shown in the graph, as reduced efficiency will mean greater fuel consumption with less ATOP produced.

3. Remember that DIN is a “mitochondrial uncoupled.

” An uncoupled is a chemical that disconnects two linked biological processes. Draw a diagram showing the linked processes that lead to mitochondrial ATOP synthesis. Mark your diagram to show “here DIN could uncouple. Graph is attached to back of assignment. DIN uncouples oxidative phosphorescently from the electron transport chain.

. Review the list of physiological effects that DIN has on the body. Which of these effects are energy-related? Using your proposed mechanism of action of DIN, an you explain them? DIN causes most users to lose weight. However, it can cause side detects including diver, cataracts, and rashes, and in some cases, even death explained earlier, DIN causes cells to use up glucose at a higher rate than normal, and if stores become low enough, they can also consume body fat through the fatty acid cycle.

By consuming fuel at a greater rate while producing less energy, the cells Nil cause people to lose weight as glucose and fat is consumed. However, reducing the cell’s ability to produce ATOP can also be dangerous.

A cell requires ATOP in order to array out the cellular functions which keep it alive. If ATOP levels in a cell drop too low, these functions may be interrupted, and this can result in the death of the cell. DIN drops ATOP production in cells throughout the body. If the effect were too severe, it could cause massive cell death in the body of the person taking the drug.

Cell death in the vital organs can lead to organ failure and death. In and around the eye, it is possible that it could result in cataracts, as protein clumps may form more easily in the lens, and if skin cells die on a large scale, a rash could develop.

A reduction in the efficiency of ATOP formation means that more energy will be wasted as heat. This heat could be responsible for the hyperthermia recorded by some users of DIN, and could serve as an alternate explanation for death and rashes. 0. Which linked processes do you think DIN is uncoupling taking into account the physiological effects you listed in question 9? Cell death and increased waste heat can explain the side effects of DIN, and this is caused by a reduction in the efficiency of cellular respiration. DIN is known to be a proton oenophile, and therefore it can be determined that one effect of the drug is to educe the effectiveness of the proton gradient existing between the intermediate space and the mitochondrial matrix. The reduction of the gradient would result in a lesser number of protons traveling through the ATOP syntheses and powering oxidative phosphorescently.

It is this process that DIN uncouples by allowing protons to flow through the inner mitochondrial membrane and reducing the proton gradient.