Although the current financial implications for Birch Paper Company are not substantial, as the contract in question is less than 5% of the volume in any division, it is imperative that Birch Company establishes and addresses its transfer price policies and procedures with each division. This will ensure that the divisions are not putting their objectives ahead of the Company’s and as a result, not maximizing the overall revenues and profits of Birch Paper Company.

This report will highlight the issues while providing a complete analysis and recommendation for you to consider. Sincerely, In examining the information provided by Birch Paper Company (BPCS) it became apparent that due to the decentralized manner in which BPCS operates its four production divisions, the overall minimization of profits for BPCS could be Jeopardized if policies and procedures are not immediately established for setting transfer prices between divisions. 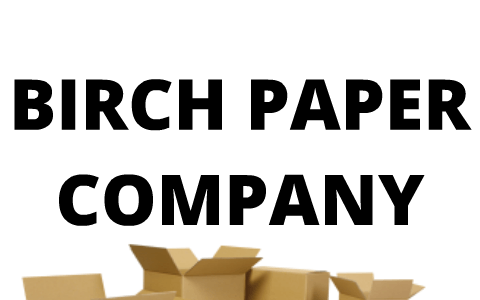 Although, the decentralization of PC’s divisions certainly have proved successful in the past, it is critical for BPCS to establish more concise guidelines to ensure that all the decisions that are made by each division are goal unguent and maximizing PC’s profits. The transfer price issue has come to your attention as a result of the Northern Division’s request for bids on corrugated boxes from the Thompson Division and from two outside companies, West Paper Company and Eire Papers Limited. Because each Birch Division manager is encouraged to go with the most cost effective supplier, Mr.

Kenton was troubled, as he did not find the current internal transfer price competitive, as the offer was 10% over the going market rate. As a result of the current dysfunctional transfer pricing policy, the division would undoubtedly go with n external supplier, even though it may not be in the best interest of BPCS. Thus, the transfer pricing policy must be examined and addressed to insure the long-term growth and sustainability of BPCS is not being compromised for short-term divisional gains. This analysis will first examine the market rate transfer prices and determine which bid the Northern Division would have made.

The analysis will than examine the transfer prices at cost and determine which bid the Northern Division would have made. Finally, the analysis will highlight, which rancher price strategy would result in BPCS maximizing profits and why.

Exhibit 1 Birch Paper Company – Case Study By Salutatorian Market Price – sell Transfer cost $280 $480 Market Price bankable costs $168 $120 $288 Variable Costs – Out of Pocket Costs $430 $391*  On analyzing the Southern Division’s cost structure, it was determined, that they have variable costs of $168 / 1000 boxes. The Division than marks up its products to the going market rate of $280 / 1000 boxes to either sell externally or transfer internally to the Thompson Division.

Exhibit 1) The Division is also running below capacity and has excess inventory, which is the first indication that the prevailing market rate may not always be the optimal price to charge for internal transfers. On analyzing the Thompson Division’s cost structures, it was determined that they have variable costs of $120/1000 boxes, as well as having transferred in costs of $280 / 1000 boxes from the Southern Division.

The Division than marks up its products to $480/1000 boxes to either sell externally or transfer internally to the Northern Division. It is also important to note, that the division has not en at capacity the past few months and that the selling price or market transfer prices of the products are actually higher than the going market rate.

Although this contract would have minimized the division’s costs, it is not the contract that is in the best interest of BPCS. By using market based transfer prices it does allow BPCS to determine the true opportunity cost and market value of the transfer and thus eliminating valuation issues with non-arm’s length transactions. It also allows for each division to assess heir performance and minimizes the potential for misapplication of resources based on defective performance measures.

However, the disadvantages of market prices are evident in this case, as BPCS was clearly not competitive with the prices its Loveless set, Ana as a result, could De losing Internal ADIOS Ana opportunities to maximize profits. It is important to note, that the Thompson Division was setting its transfer prices even higher than the market rate, which again would result in dysfunctional decisions. As well, the market rate transfer prices are also not reflecting whether the divisions re at capacity or have excess inventory, which significantly affects the transfer prices.

Because the Southern Division is operating below capacity and has excess inventory, it could establish its transfer prices at its variable costs, to ensure that it at least sells its excess inventory. The Thompson Division because it is also not operating at full capacity, could potential price its transfers at the incremental costs of fulfilling the order, if the contract bid prices with outside suppliers were close.

Although, each specific division may not increase its reported bottom line, BPCS would t least be able to determine if internal bids were competitive with external bids, and thus eliminate the possibility that a bid was contracted out to an external party, due to incorrect pricing.

When examining possible one-time orders, it is critical to analyze capacity and the incremental costs associated with fulfilling the orders.

It is also important to evaluate whether these one time orders could effect the demand for the products in the long run because if such orders did effect the demand, it would be imperative, that full costs and a reasonable profit were recovered. In analyzing the internal transfer prices if they were calculated based on variable costs, the Thompson Division’s bid would have resulted in a very competitive bid of $288/1000 boxes. The bid would have comprised of $168 / 1000 boxes in costs in the Southern Division and $120/1000 boxes in costs in the Thompson Division. As a result of this pricing strategy, the Northern Division would have selected the contract internally from the Thompson Division. Using this pricing strategy, PC’s costs would not only be minimized, the company would also be maximizing its revenue and profit potential.

On determining which internal pricing strategy would maximize the overall profits for BPCS while also examining the effects on the various divisions, Exhibit 2 and 3 highlights the costing implications for both the transfer prices being set at market prices and at variable costs.

It becomes evident that when the transfer price is at the market price, the Southern and Thompson Divisions would have benefited the most, however, it would have been at the cost of the Northern Division. The impact on BPCS would have been an expense of $391/1000 boxes. When the transfer price is at the arable cost, the Northern Division would benefit, however, the distinction is that BPCS, as a whole would incur expenses of $288 in comparison to $391/1000 boxes, under the market price strategy.

This is a direct result of PC’s current divisional evaluation policy.

Because each division is more concerned with its own bottom line, the decisions they are making are actually resulting in PC’s profits and long term sustainability being threatened. In making a recommendation, it is important to note, that the financial objective of BPCS is to maximize profits. Thus, the overall goal and objective of BPCS must be aligned with the various divisions. Because the evaluations of the divisions are completed independently, BPCS ‘s divisions are making sub optimal decisions with the rent transfer price strategy.

It is imperative that BPCS establish new measures in wanly ten various Loveless can De evaluated, winter It’s tongue non-manacle measures such as quality or service. By concentrating on these non-financial measures it will allow BPCS to shift its focus from the divisional goal incongruent profit figure to measures that will enable better and more congruent decision- making.

Management may oppose, as the autonomy of the division may seem as though it is getting compromised, however, it is imperative that they realize the rent pricing implications and the effects they are, and could have on PC’s profits.

Transfer price strategies could involve having negotiated prices between divisions, in which the divisions themselves could establish the rates, as they would have a more thorough understanding of the cost drivers. When evaluating whether to fulfill a contract internally or outsourcing, it would be beneficial for a cost analysis to be conducted which factored in capacity, inventory levels, and incremental variable costs to determine what would be most profitable alternative for BPCS both in the short and long term.