Hong Kong Disneyland: Where Is The Magic

Also, we provide the major takeaways from Disney‘s entry into the South-East Asian market.

Hong Kong Environment By 1999, the year of Disney’s announcement, it was clear Hong Kong was in the throes of a recession for the first time in 20 years. Just two years earlier the Asian financial crisis swept through Hong Kong as reflected in the material drop in property prices and the 1998 contraction of the GAP from first quarter’s 2. 6% to 5. 1%, 6. 9%, and 5.

7% in the following quarters resulting in an overall reduction of 5. %, nearly reversing in lull the growth observed in 1997. The pain was felt in all sectors of the economy. While wages stagnated, spending on superfluous wants dropped significantly Including tourism – Disney’s target sector In Hong Kong. Total spending dropped 2.

4% from 1997 to 1998 though unbound Visitors from China crept up 13. 1% over 1997. Nevertheless, China’s population was booming and Hong Kong was the beneficiary of their tourism dollars at a time Disney was excited to gain direct access to the fastest growing country In the world.

The American market for Disney was mature. They carefully managed the evolution OFF AT tenet theme parks In sun a way Tanat unlikely positional teem to Drank out Into growing markets with a seemingly seamless approach, which they observed in their successful Tokyo endeavor. Their proprietary theme park experience was an untapped opportunity in Hong Kong.

Theme parks in general were not in short supply in Asia in the late ‘ass, highlighting their popularity. Between 1994 and ’99 2,000 new parks were built in China alone.

Disney had the benefit of coming in with an established brand and product to take advantage of the popular theme park sector. Since the Disney name and all that moms with it were internationally popular and the notion of the American Dream was popular in Asia, the cultural and even language differences were thought to be largely inconsequential. Decision to Go Global The American market was stagnant which made expansion into global markets an attractive option.

Disney has great success operating as a holiday destination so setting up shop in a large city abroad filled with tourists would create a great potential market. 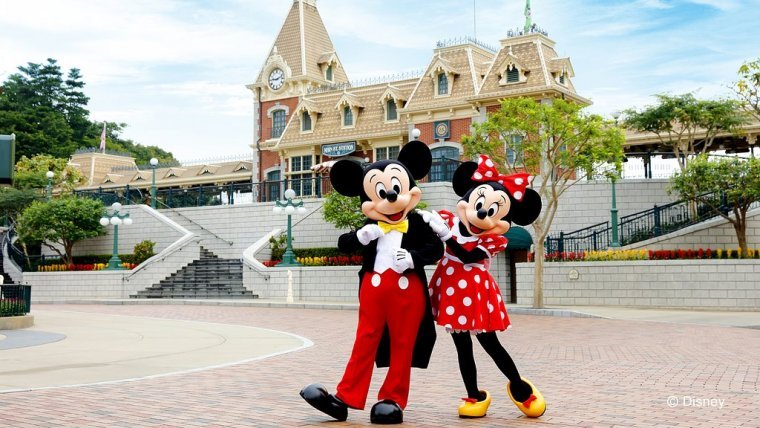 One of Disney’s boasted strengths was their ability to create a happy and magical place, where their guests can relive fond memories and become inspired. Disney has been very successful using architecture, landscaping, costumes, music, entertainment, attractions, merchandise and food to create exotic, fairy tale like, and adventurous atmospheres within one theme park at the same time.

The parks in America were extremely well managed and organized in which the guest routes throughout the park were pre-determined and the staff had been rigorously trained.

The company was confident with local research and hired expertise they could easily adapt for Chinese culture differences and have similar success as Tokyo Disney. The company planned to make a few modifications to Disney’s current management style to meet local expectations, such as architecture and menu items. Disney did not see Ocean Park as a serious competitor and therefore made few changes to their marketing plan. The park was established in 1977, and was marketed as a nature-centered park though performance was described as “lackluster” and “not aggressive enough” where advertising and product development were concerned.

Disney priced tickets at nearly double the price of Ocean Parks tickets and gave little incentive to travel agents for tickets booked. Target: Hong Kong After two vastly different experiences opening international Disney parks, an wineries venture into an Asian country was a given. Tokyo Disneyland had been extremely successful from day one with little demand for cultural assimilation; Disney was ready to open their own park in Asia. In the early sass’s Hong Kong was showing signs of recovery from the recession. In 2004, the economy experienced an 8.

% increase in GAP and in increase in local consumer spending and confidence. I Nat same year ten region also receiver an enormous under AT tourists a year, approximately 21. 8 million visitors with 12. 45 from mainland China. With the expansion of the Individual Visit Scheme (AVIS) the growing presence of the Chinese suitors could be counted on. It was a known fact that the Chinese enjoyed visiting theme parks from the massive number built throughout the mainland in the ass’s.

However, the only attraction park in the region was becoming outdated and was no longer viewed as a main attraction.

The region’s government was interested in Joining Disney in a Joint venture which would ease some of the financial concerns of company expansion. With the growing presence of Chinese tourists, one direct competitor, and involvement of the regional government Hong Kong was a very attractive market opportunity. Joint Venture Decision Entering foreign markets is accomplished via three major approaches: export/import, licensing, and/or foreign investment. Disney had experience with all methods prior to entering Hong Kong with varying degrees of success.

They have exported products throughout the world, used a licensing approach to enter Japan, and a direct investment approach to enter France/Europe. In deciding the entry mode to Hong Kong, past experiences may have contributed to selecting Joint venture as the best entry mode to Hong Kong. The overwhelming success of Tokyo Disneyland suggests licensing is not the best strategy. Disney was to able to fully capitalize on the success of Tokyo Disneyland. They only collected licensing fees, thus missing out on the opportunity to enhance revenues by limiting their stake to Just licensing fees.

The success of this entity was at least partially due to the ‘aspiration quality of American culture exhibited by the Japanese. Further analysis of past market entry experience suggested direct investment may not be the best option either. Disney chose direct investment when entering the European market being a controlling shareholder in the Euro Disney entity. Euro Disney found itself saddled with large debt struggling to survive. Unlike the Japanese experience, the French believed Disney was practicing cultural imperialism through its operation.

Needless to say the French do not share the same aspiration quality of American culture as the Japanese. In looking to Hong Kong, Disney had to look at these past experiences to find a happy medium between the success of Tokyo and the less successful entry to Europe. Thus a Joint venture with the government of Hong Kong was born. This entry mode allows Disney to share more risk, unlike Euro Disney, but also reap a greater benefit in the event Hong Kong proves to be as successful as Tokyo Disneyland.

The Joint venture setup with the Hong Kong government should, in theory at least, allow Disney to avoid the cultural missteps of Euro Disney while making entry smoother and paving the way to greater profits.

Having selected a Joint venture as the entry method, was their entry successful? The price to enter the park was nearly double the competition. Not necessarily a problem until you KICK at survey results snowing ?/U% AT respondents expected a lower admission price. Coupled with a poor commission structure for travel agents, Disney was off to a rough start once the park opened.

Even before the park opened there were problems. Public criticism was directed at the nature of the Joint venture; operating the park as a private entity with public funding was not well-received. Fire ant colonies were found throughout the property.

Testing of firework displays led to complaints from area residents and local officials. In response, Disney refused to use a less noisy system used in other Disney properties as they argued they were following local regulations. This inflexible approach led to animosity between the company and locals.

Additionally, packs of wild dogs were using the park as a location to scour for food leading to visitor safety encores. Attempting to learn from their experience in France, Disney endeavored to integrate local customs and practices into park design including using fend shut. However, the decision to offer sharks fin soup caused another problem.

Local conservationists argued this was a status symbol and not a local custom. They pointed to the competition not offering this delicacy as a good example.

Once the park opened, there were further issues. Reaching park capacity, turning people away and long queues were unforeseen operational issues resulting in further headaches for Disney. Despite looking to their past for guidance, taken as a whole, Disney’s initial entry into Hong Kong was not very successful. Lessons Learned Disney has numerous lessons to be learned from the opening of the Hong Kong theme park, some of which were available to them before making the Hong Kong decision based on their moves into other countries.

The common theme among these lessons is that Disney needed to better understand the context of their business venture before starting, throughout the implementation process and post opening. In the case of Disney and Hong Kong, the relevant context includes competition, purporting industries, the cultural setting, and understanding the target customers’ wants and measurement of satisfaction. The first lesson the Walt Disney Company learned while expanding into Hong Kong is to understand pricing structure.

Their main competitor, Ocean Park was more aggressive in sales on mainland China by offering better commission rates to travel agents. The university study showed expectations for adult pricing ranged would be in the range of HECK$200 – HECK$300 while the actual price was HECK$295 on weekdays and HECK$350 on weekends. This pushed potential guests out of the Disney market to lower priced Ocean Park.

I nee were not acting proactively towards employee nylon work conditions, green initiatives, animal rights activists and the “Disney Hunters” who brought to light inhuman labor practices. Disney spent a lot of time repairing its reputation from marketplace issues rather than projecting the Disney image to potential guests. The third lesson learned is an operational issue. Disney should have had smaller more manageable openings, leading to larger crowds.

Opening the park to maximum occupancy for a charity event was noble but created only downside risk to Disney operations.

They saw quickly they could not handle the crowds in every aspect. After the fact they basically blamed their customers believing the problems stemmed from a lack of understanding the flexible ticking system. The last lesson learned is for Disney to be more local in all regards. First, hire local high level managers to run parts of the operation. This could have avoided several issues like the Chinese New Year ticketing problem, management turnover, inspections and catering menu options.

Also, the Hong Kong people working on the project would not have felt they were being forced to manage to the Disney policies. In summary, Disney’s strategic decision to enter into the Hong Kong market via Joint venture with the government was a logical decision. Tapping into the China market, home to the worlds most populated country and a fast growing economy, Honk Kong Disneyland seem destined for success. However, as with past international expansions Disney faced a whirlwind of cultural, economic and management issues that tainted the original vision to spread Disney magic into South-East Asian market