Societies all over the world have their own patterns or pictures of how normal people should behave in a certain society.

Unknowingly, people in a society behave in accordance to what a society sets as “normal”, but inevitably, there are some Individuals who choose not to follow the standards. These people are called the deviant people–those whose behaviors fall far outside of society’s norms. Every society In the world has cases of people breaking rules such as stealing, assault, or taking illegal drug; even being very Intelligent or being so tie can be considered as deviant.

Last July 28, 2013, my partner and I are able to understand a person who Is considered as a deviant In this society. HIS sister let us enter Inside the life of his brother and shared to us the process of how he had become an “outsider” of this society. Julius Blaze, our subject, Is a drug addict.

In his case, It was clearly not Inherited or an Innate behavior, but It was the Influence of the people around him who drove Julius In the Intake of Illegal drugs.

Since Julius ND his family live In an unprivileged area where there were Limited resources of good education, we assumed that Julius, in such a young age, was provided little knowledge about the effects of the drugs he took. Only later did he realize the consequences of his actions. Even if his friends’ actions were irrational, Julius chose to conform. As Sash’s research stated, many people are willing to negotiate their own judgments of right and wrong to avoid being considered as an outcast and different. The theory of differential association introduced by Edwin Sutherland indicated that person’s tendency toward conformity or deviance depends on the amount of contact with other who encourages or rejects conventional behavior. 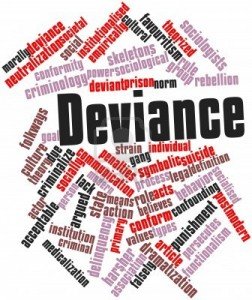 In this case, the subject spent almost all of his time with his group of friends. Thus, in order to blend in with his friends, Julius had to agree and behave in compliance with his friends’ definition of normal; moreover, motive for continued behavior evolves through participation in the behavior in the company of others.

Julius never gained to have a second chance in his life. Social control is the attempt by society to regulate people’s thoughts and behavior, and self-control is under the category of social control.

Social control’s attempts to manage people’s behaviors would not be achievable if the people in it do not have self-control. Every society has groups of people in charge to regulate peace and order In a society, such as policemen, traffic enforcers, lawmakers, and a lot more.

In Julius’ area, we resumed that they have fewer policemen than urban areas do, less focused by the government, and fewer people to look out for their behavior. In a small society with weak bonds of social control, the people living there are more likely free to deviate since there would be less chance that they will be restrained. According to social control theory, what causes people to use Illegal drugs Is the absence of social controls promoting conformity.

On the other hand, lack of parental guidance Is one of the many causes of low self-control of deviant people.

Being neglectful parents could rattle Impact the life of their children since the young ones generally look up to their parents as the role model of their lives. So parents who fail to show care and concern, also Tall to recognize AT want tenet CNN learn nave Decode. I Norte, sell-control is caused by a factor that takes place very early in one’s life, whereas social control can operate more or less throughout one’s lifetime, but in a society, self-control and social control ought to have continuous balance in order to attain organization.