Through effective leadership, an environment was rated which enabled success and profitability as well as creative strategies and campaigns. Both Coke and Pepsi developed and deployed aggressive marketing campaigns which began generations ago by fighting trademark infringements and continued with cleaver and aggressive sales techniques. By branching into other flavors and types of drinks via mergers and acquisitions, both Coke and Pepsi generated additional revenue from more than Just their core beverage.

Compare the economics of the concentrate business to that of the bottling business: Why is the profitability so different? The process of producing carbonated soft drinks, or Cads, Is a multi-staged procedure that Involves varying levels of capital and labor. The two most significant processes involved in the production of a SD encompass the concentrate business and the bottling business. Concentrate producers blend raw ingredients into a packaged mixture that is subsequently shipped to bottlers, who purchase the mixtures, add carbonated water, and bottle or can the resulting SD.

Both businesses fifer In their nature and scope, and as such, the profitability, sustainability, and overall economics of the concentrate and bottling businesses vary.

The concentrate business has been historically dominated by large magnates such as Coca-Cola and Pepsi. Data from the case study detailing the industry breakdown indicate that Coke held 51% of market share in 2003 while Pepsi and Catbird Speeches held 22% and 6% of International market shares for that year respectively. 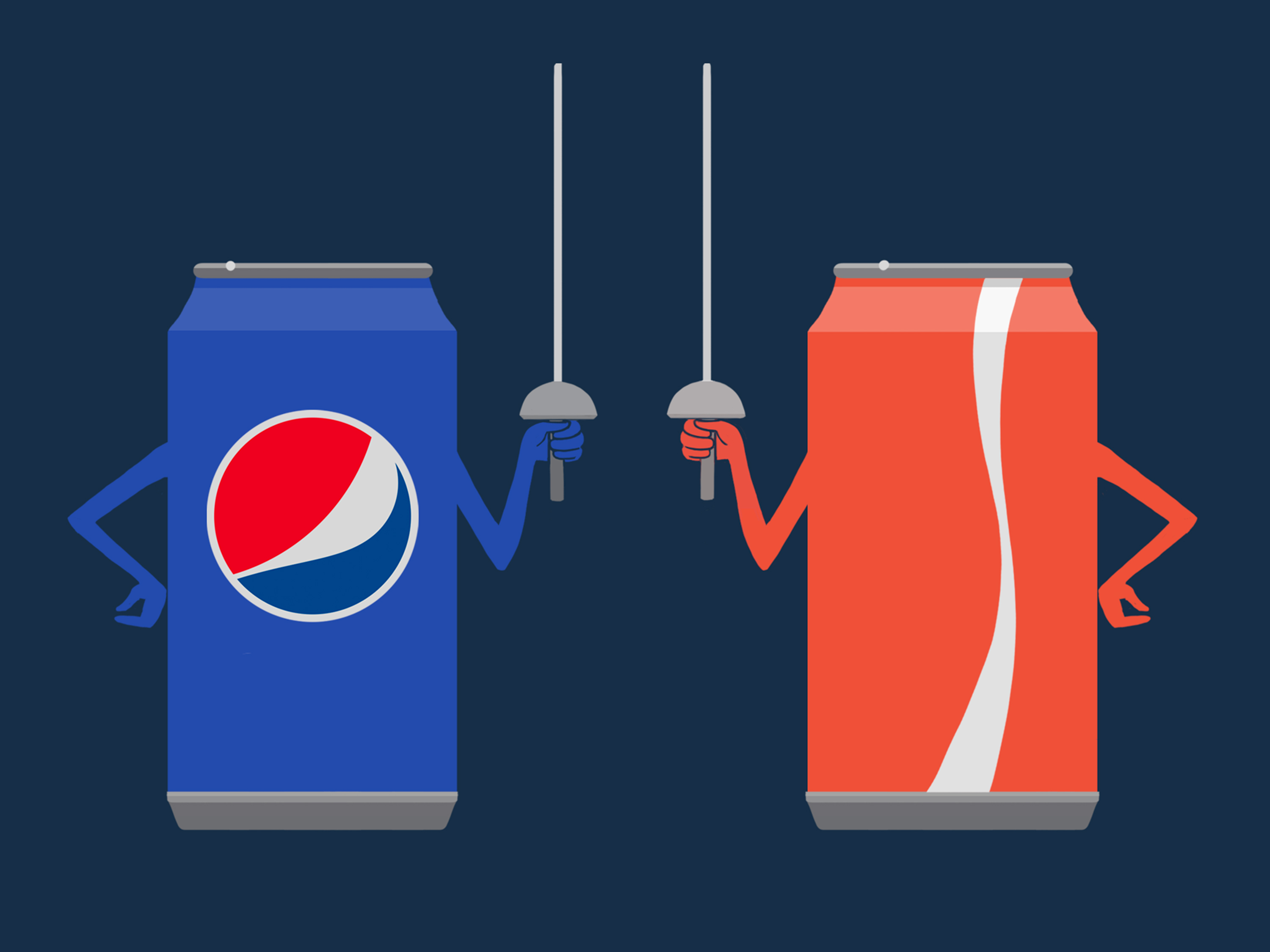 Analysis of this data Indicates that the market structure for SD concentrate producers Is logistically. I nee production process AT concentrate involves comparatively little investments in capital and labor, and a typical concentrate manufacturing plant costs between $25 million to $50 million to build.

In addition, Just one plant could [theoretically] serve the entire United States.

The bottling business, on the other hand, differs significantly. Bottlers must make large investments to build plants and production lines, which are interchangeable only for products of a similar size and package.

The cost of building a large bottling plant could range as high as $75 million and both Coke and Pepsi each squired up to 100 plants to provide effective nationwide distribution, indicating that the market structure of bottling plants is far more competitive than that of concentrate producers. Bottlers must also purchase concentrate, which accounts for up to 45% of the cost of bottling sales, making concentrate a major input to bottlers and indicating that SD prices are subject to market forces influenced by concentrate producers.

Using several of Porters’ Five Forces Framework of Sustainable Industry Profits, the economic dynamics of both businesses may be compared even further. Entry into the concentrate and bottling businesses is very strict. Prospective entrants into the concentrate business, though relatively inexpensive to that of bottlers, must challenge well-established oligarchs, each over a century old, that spend massively on research and marketing campaigns, thereby providing a significant entry barrier.

Entry into bottling is far more expensive and the high number of bottling plants required for nationwide distribution indicates a highly competitive market structure, placing its own barriers on prospective entrants. A low concentration of concentrate reducers and a high concentration of bottlers means that profitability for the existing concentrate producers is much higher than that of existing bottlers.

Bottlers are the buyers in this dynamic and the high number of bottling plants bidding for concentrate drives the market price of concentrate upward. The necessity to purchase raw material, the resent of foreign bottling plants using cheaper labor, and high switching costs further decrease bottler buying power. A concentrate producer may switch bottlers with relative ease as compared to bottlers who want to switch concentrate producers, who would then have to make significant investments in changing their production lines to adhere to a new product.

This decrease in the number of bottlers was largely due to higher operating costs and thinner profit margins as compared to concentrate producers, and both Coke and Pepsi made strides to purchase bottling plants, which they maintained as publicly held Independent entitles. .

How has the competition between Coke and Pepsi affected the industry profits? The growth in profits for Coke, Pepsi, and the SD industry have decreased in recent years for many reasons including changes in the cost of distribution, input prices, increase in advertising expenditures, and diversification into other non-carbonated products. The change in public sentiment towards high sugary drinks also contributed to the decline in demand for sugary carbonated products. The power of buyers has increased throughout the years.

The negotiating power of large food retailers like Wall-Mart altered the profits and longstanding business practices. Supermarkets were so accustomed to using carbonated cola drinks as a drive to in-store traffic that they resisted price increases. One example is found in Exhibit 5, where of the years displayed, the retail price change was always rower or negative compared to the change in ICP.

The combination of increased buying power of large retailers and the inability to increase prices weaken the revenue and profits for the cola companies.

Substitutes played a major role in decreasing growth in profits for both companies.

Demand decreased as the general US population became more health conscious. The carbonated soda industry introduced substitutes, but even with higher profit margins, these substitutes produced lower sales volumes than carbonated sodas. The SD industry eventually grew their businesses internationally which brought about other difficulties. International markets have lower consumption levels than the US. The average consumption level is the US was 837 eight-ounce cans in 2004 while the average Chinese drank Just 211.

The search for new growth in other countries carried with it different expenses and required more time to adjust to different cultures and economies. The growths in profits in the early 21st century for both Coke and Pepsi have decreased in some sections of the industry. The international growth in profit/sales for Coca-Cola during 2002 to 2004 decreased 6 % (Wife 18). During the same period, Pepsin’s bottling group’s growth in profit/sales decreased 9%.

While Catbird Speeches’ average profit/sales growth for both Europe and the Americas, on average, decreased

During the “Cola Wars” these companies have gained substantial experience in marketing and international growth to have enough stockpiled funds sustain growth. Provoked by competition in the market and competition for customers, Coke and Pepsi have a seemingly endless oratorio of ideas on how to keep and increase their sales. In 1982, at the height of the “Cola Wars,” Coke introduced Diet Coke, which was a huge success. It was proclaimed that it was the “most successful consumer product launch of the Eighties”.

The Eighties were very important for growth in both companies as new products were introduced. A new type of competitive rivalry was born where the companies introduced new types of packaging and there was competition over the shelf space in retail locations.

Besides, Pepsi and Coke both had around ten well-known brands, which helped them to enter other markets. Both of these firms will be able to sustain their future profits. At the very beginning of the 21st century, Coke experienced problems with execution, whereas Pepsi performed well and acquired other companies.

These actions increased Pepsin’s success and helped it to gain a more diversified portfolio. The future of Pepsi and Coke possibly lies in diversification into other non-SD products. Due to popular health concerns, “regular Cads [were identified] as the largest source of obesity-causing sugars”, the consumption of ordinary Cads dropped.

However, brands like Coke Zero and Pepsi Diet helped keep total sales stable as there was a crease in the consumption of regular soda, but an increase in the consumption of these substitutes. Pepsi realized that in order to be successful, it needed to diversify aggressively, so it did: “Pepsi developed a portfolio of non-SD products that outsold Coke’s rival product in each category…” As the result of that development Pepsi was sharing 47.

3% of the non-SD market comparing to Coke’s 27%. Both, Pepsi and Coke, diversified into non-Cads.

However, ten Introduction AT new Dramas Ana Elaborations Is not enough to sustain profits, and both companies understand that. The U. S.

Arrest is very close to saturation as an average American consumes approximately 52 gallons of Cads a year.

As a result, Coke and Pepsi looked abroad for future profits. Coke has a big advantage over Pepsi, since it secured its place as the largest soft drink producer toward the end of WI. During the period after the war Coke expanded its international distribution channels and became a synonym of American culture. Later Pepsi could move into Middle East and Soviet bloc as well as emerging markets. Pepsi and Coke’s profits are also sustained due to the existing barriers to entry in their markets.

Product differentiation exists on the market and a SD is a very specific type of product.

It means that if a person wants a can of cola, there are not many substitutes they can obtain. As a result of huge investments in advertising, customer service, and trademark regulations there is also strong brand identification. This fact ensures stable consumption levels and profit sustainability in the future.