Aiming towards a market leading position, Portuguese and Spanish based Sonae Industria established Sonae UK in order to meet the shortfall in supply of high quality chipboard within the UK market.Strategically placed on the M62 corridor, Sonae UK is poised to produce half of the one million cubic metres per year of particleboard that is currently supplied by imports into the UK. With over forty years of accumulated Sonae experience the plant is set to utilise ground breaking technology to produce the world’s most advanced chip board, at both a competitive rate and with improved delivery standards.The £70 million investment at Knowsley represents one of the UK’s major manufacturing investments for the last ten years. The size of the investment alone provides proof of the company’s vision and its determination to meet the needs of its customers.

As production at the plant commenced, Sonae UK invited Image Systems UK Ltd and 2 other security specialist companies to tender for a remote monitoring facility.

This facility needed to cover the entire production process including the tipper, flaker shed, debarker, chipper, log store, shaker, press, dryers, store coolers and storage facilities.Managers and supervisors at Sonae UK needed to be able to see what was going on around the plant in terms of both security, process monitoring, manpower deployment and in particular health and safety.Rodney Mitchell, plant manager, Sonae UK comments, “It takes one and a half hours to walk around the entire plant. The whole site covers twenty-three hectares within which there are fifty two thousand square metres of roofed area. In the construction stage more than two and a half thousand tonnes of steel and seventy eight thousand square metres of metal wall and roof cladding was used and thirty thousand cubic metres of concrete was laid.

That’s the equivalent of Wembley football pitch covered in concrete 5 metres deep!”The solution, forming part of the existing CCTV camera system for security monitoring purposes, not only needed to provide increased flexibility from the camera system, but also needed to achieve total control of the plant from any location and enable viewing from off-site should it be required.Miguel Hemsworth, IT manager, Sonae UK comments, “We have a centralised control room, but with the existing system we found that it was difficult to monitor certain parts of the plant.” 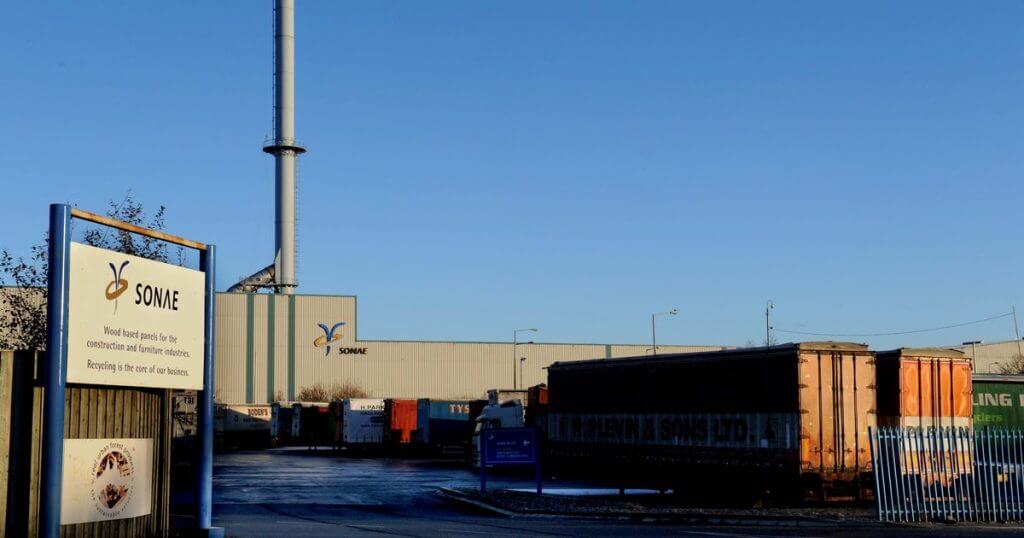 Mitchell comments, “We wanted to see everything.

At any moment in time, there are only 5 or 6 people covering an area of thirty thousand square metres, which is a huge area to be monitored. The computer programmes we use produce reports, but this is only feed back from a PLC (programmable logic controller.) A machine can never make up for the human eye, and having a camera there doing the same job remotely is like having another set of eyes.”Image Systems, professional installers of Digital Security Systems, based at Ellesmere Port near Liverpool, was selected by Sonae UK due to the functionality of its proposed system and the quality of previous installations.Image Systems once again approached leading UK CCTV specialist Dedicated Micros and was proposing to install and integrate DMICROS.COMputers’ innovativeV-serve 100 technology – a tried and tested approach for putting live video over a network.

Marc Harris, managing and technical director, Image Systems comments, “Running on a CAT 5 Ethernet network, DMICROS’ V-serve 100 allows Sonae UK to monitor its entire production facility from remote locations, through the delivery of live digital video to the desktop over a LAN network, Intranet or the Internet.”Compatible with a Netscape browser and Microsoft Internet Explorer, V-serve creates the effect of live video by delivering digital content to the desktop at a rate of twenty five pictures per second.V-serve technology allows users at Sonae UK to view live images from twelve cameras, although there is capacity for as many as sixteen. Easily customisable for specific applications, V-serve 100 has been developed so that archive video can be stored for longer than the standard twenty four hours. Unique to V-serve, recording continues uninterrupted whilst the viewing and reviewing process is taking place.

V-serve provides the additional security of password protected features for selective access and restricted camera usage for complete viewing control. In addition, it also features alarm facilities, allowing triggers from tolerance measurement systems to ‘tag’ particular events, such as the outbreak of fire or jamming of machinery, so that they can be quickly located, or even presented as frames of footage upon alarm activation.Harris explains, “Due to the size of the plant, we have used approximately eighteen kilometres of CAT 5 cabling in the installation. Additionally, we also needed two and a half thousand metres of mains cabling for the cameras and control equipment. Despite its enormity, the installation was very efficient. Live video images were delivered to the desktop as soon as the system was switched on.

V-serve technology ensures that the production processes at Sonae UK are running effectively. V-serve enables managers and supervisors, both on and off site, to improve safety, security and manpower deployment within the plant and ensure that health and safety standards are met.The ‘tagging’ of particular events not only provides an early warning system in the event of a fire, but also adds an extra safety element if things go wrong on the production line.Additionally, V-serve enables users at Sonae UK to rewind, replay and pause images. This enables potential problems on the production line to be identified and resolved before costly stoppages occur and keeps a record of any interesting events.

Mitchell comments, “The raw material we use is not of any set geometry, which can often cause blockages, jamming the production line. Following the installation ofV-serve technology a blockage in one of the suction pipes was discovered and the machinery was subsequently stopped after 5 minutes. Previously, it would have taken so much longer to be detected and resolved, by which point it would have created a huge potential fire risk.”Mitchell continues, “The most important function is finding out why something happened. By reviewing the video images, we can identify what exactly occurred and why it happened. We have come to the point where V-serve has become an essential operations tool.

“Harris comments, “We set out to achieved total coverage of the plant and total control from any location. V-serve enabled us to achieve this.”

V-serve technology has become a vital tool at Sonae UK for ensuring the efficient monitoring of operations.Aiming to increase the deployment of V-serve technology at the plant, Sonae UK intends to extend the system as they double the capacity of the plant and cameras within the machinery intensive areas of the current installation.Proposed developments for the system include both the maintenance of machinery via remote video images and telemetry control of the cameras.