The Hollow of the Three Hills

Hawthorne draws in his audience into the dark and mysterious world of the Hollow of the Three Hills by using a descriptive opening that captures the readers’ imagination and creates stunning imagery . The opening of this novel clearly depicts the darkness and decay of the world and the mystery and evil that the audience will be presented with.

Through the use of setting, language, and detailed description in the opening of the story, Hawthorne quickly develops the theme and story of darkness, loss, and shame.The reader is met with powerful imagery of darkness and the lack of life in the opening of the story, and this is done through the words that Hawthorne uses. The diction and language of the first paragraph quickly illustrates the eerie atmosphere of the story. Hawthorne chooses many words that have connection to death, words such as ‘decay’, ‘decrepit’, and ‘hollow’, creates such a strong sense of loss and lifelessness, to not only describe the setting but the old woman as well. The use of such strong dark words strengthens the theme of loss in the story.

There is the loss of beauty, which can be seen in the ‘formerly majestic oak’ that now ‘lay mouldering’; everything in this hollow is decaying. This theme of loss is connected later to the young lady, who has lost her husband, her family, and a whole life that she used to know. Through the use of creating such a bleak setting in the opening of the story, it can be seen as a pathetic fallacy for the life of the young woman ‘with an untimely blight’. Furthermore, Hawthorne uses quantitative words, which lend to the great description of the setting. The ‘mathematically circular basin’, the ‘numerous’ dwarf pines on those ‘three hills’. The imagery that Hawthorne creates with his intense detail allows the audience to really delve into and picture this dying world, and feel that there is nothing living among the hollow of the three hills. 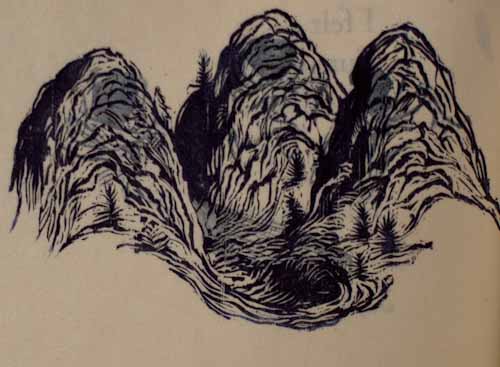 Moreover, in the opening of the story, there is a spiritual as well as religious element. When Hawthorne describes the hollow as having been the scene for the ‘Power of Evil’, he makes reference to the devil, which demonstrates that there is dismal hope for a good ending whilst being in the Hollow. Moreover, the place was used for ‘impious baptismal rite’, it furthur strengthens the eerie spiritual atmosphere, and the reader is nervous as well as prepares the reader for a chilling encounter.

Hawthorne gives supernatural life to the hills, and creates the mystery and evil that exists in this place where ‘no mortal could observe’. Later in the story it is this dark magic the old woman uses that reveals all the tragedy, which can be related to the ‘Power of Evil’, and the reader feels that she is part of all the decrepitude and evil of the hollow. The mystery of what happened with this young woman remains, leaving the audience with the unsettling option of having to imagine what tragic event must have led to all this happening.Hawthorne’s style in this piece is archaic; which can be seen in the words ‘plighted’, ‘blight’ as well as ‘wouldst’. Moreover,he does not use the traditional way of constructing sentences.

His olden language and style can also contributes to the haunting feel to the story, and all this can be found in the opening of the story. The old language, connects to theme that everything is ‘decaying’, and coming to an end.In the introduction of this piece, Hawthorne clearly illustrates two classical archetypes that are part of many horror stories as well as tragedies. The young lady that is ‘form and fair of feature’ can quickly be distinguished as the damsel in distress. Her role in the story is made obvious to the audience as they are aware of what she represents, and that is loss, hopelessness, as well as being drawn into a world that she knows nothing of and is at the hands of someone terrifying. Her description in the opening of the story is chilling, and is connected to the setting, she is like the ‘chill beauty’ that Hawthorne uses to describe the sunset.

However, she is out of place among all this death, and therefore, the reader is ready of a harrowing story concerning the woman.Moreover, the ‘aged crone’ quickly matches any classical description of the wicked witch in such a tale. Her description in the opening of the story is in line with the decrepitude of the whole setting, ‘ill-favored’ , ‘withered, shrunken’ it is her dark evil and mystery that later in the tale reveals the whole sad story of the young girl. However, it is how she takes pleasure in the miserable situations that take place, how her smile was ‘like lamplight on the wall of a sepulcher’ , vividly shows her that she too is evil,and related to death. Hawthorne uses these classical archetypes to not only match his archaic language and structure, but also contributes to how easily the reader will be ready for a daunting and dismal story between these two women, that does not necessarily have a happy ending,. Just as how it was easy to identify what would happen between Snow White and the Wicked Witch of the Forest.

Hawthorne manages to immediately envelope his readers into the world of his tragic story through the use of beautiful description, classical elements as well as great diction, which all contributed to the development of a strong theme from the very beginning. With such an opening, the reader can only delve further into the story of these two ill fitted characters and watch these strange events unfold.