Blue Nile is an online jewelry retailer founded in 1999. It is based in Seattle, Washington and competes with online retailers such as James Allen, Belgium Diamonds, and Ringsberry.com.

The company that became Blue Nile began in 1995 when Doug Williams of Williams & Son Inc. of Seattle started a website to sell diamonds online. Mark C.Vadon, then a management consultant at Bain & Company, purchased a diamond engagement ring from the site in 1998. In 1999, Vadon raised $6 million to purchase 85% of the company and improve the website. The company’s name was changed to Blue Nile in November 1999. During the next year, the company raised an additional $44 million. Investors included Bessemer Venture Partners, Kleiner Perkins Caufield ; Byers. Blue Nile raised $76 million in its IPO on May 18, 2004. Merrill Lynch ; Co., Bear Stearns Cos. and Thomas Weisel Partners LLC managed the IPO, sharing fees of $5.4 million. The initial public offering of shares in Blue Nile Inc, rose 39% in first-day trading, closing at $28.40.

Although the company had $44 million in revenue in 2000, it lost $30 million because it spent $40 million in television advertising. Its investors contributed an additional $7 million in 2001. In 2006, Blue Nile sold $197 million in engagement rings and wedding bands, compared to $186 million for Tiffany;Co.

In November 2011, CEO Diane Irvine, who had been with the company for 12 years and its CEO since 2008, abruptly resigned. Irvine was replaced on an interim basis by senior vice president and general manager of international Vijay Talwar. In March 2012, Harvey Kanter, former CEO of MooseJaw, was named the new CEO.

In 2015, Blue Nile reported net sales of US$473 million and net income of US$9.7 million. Blue Nile promotes itself as a supplier of ethically sourced diamonds and endorses a zero-tolerance policy towards conflict diamonds.

In the summer of 2015, Blue Nile opened their first showroom at Roosevelt Field Mall on Long Island, New York. The company has since opened showrooms at shopping malls in White Plains NY, Tysons Corner VA, Salem NH, Tigard OR, and Bellevue WA.

Blue Nile was designated a Bizrate Circle of Excellence Award winner in 2016. 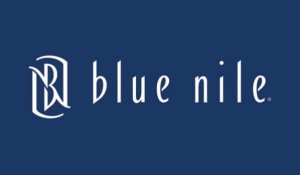